Back to all posts

Travel on musical paths while staying at home, and going gently down the stream

My musical paths have gone a few directions over the last several months. I began recording a classical album, and then turned to a project that is currently under wraps, but should be revealed later in 2020...

In the meantime, I realized there was some nice music sitting there that could be shared without anyone leaving home! It has been a joy to work with Kent Harrison at Sammamish Sounds studio, and I'm looking forward to a time when we can safely continue. Kent sent the Chopin Piano Prelude we had recorded over to Rachel Field at Resonant Mastering, and with the magic of technology, the Chopin is now out everywhere online officially on April 24th!

I continue to work on my own compositions, and was thrilled to have been commissioned by Wayward Music to record pieces-in-progress for their Wayward in Limbo series, available to stream for free on SoundCloud. Much gratitude to Dr. Ben Thomas for recording me during this stay-at-home time. These pieces (and more) will eventually be recorded in the studio for a future album.

As you may imagine, there isn't much work for full-time performing musicians such as myself. Folks have asked what is the best way to support financially when getting music online. I have a choose-your-price option here on my website for downloading the Chopin (minimum $1 for the single) and for purchasing physical CDs (minimum $15, shipping is free:)  My digital music is distributed through cdbaby, and they are great about having artists keep 90% of a sale from downloads.

Streaming is another matter. I definitely understand the appeal of Spotify and other streaming sources, and you can find my music there. I get paid between $0.001-0.003 (.001 being about a tenth of a penny) per stream (song play), so it takes several plays to make one cent on Spotify. Having said that, I still think every drop in the bucket counts, and perhaps you are also in a financial position where listening to music on Spotify makes the most sense. With your sense and these cents in mind, we can go mindfully and gently down the stream.... 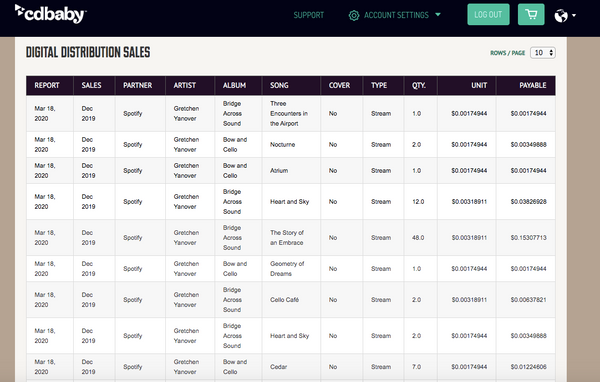